"The Lord gives strength to his people; the Lord blesses his people with peace."
–Psalm 29:11 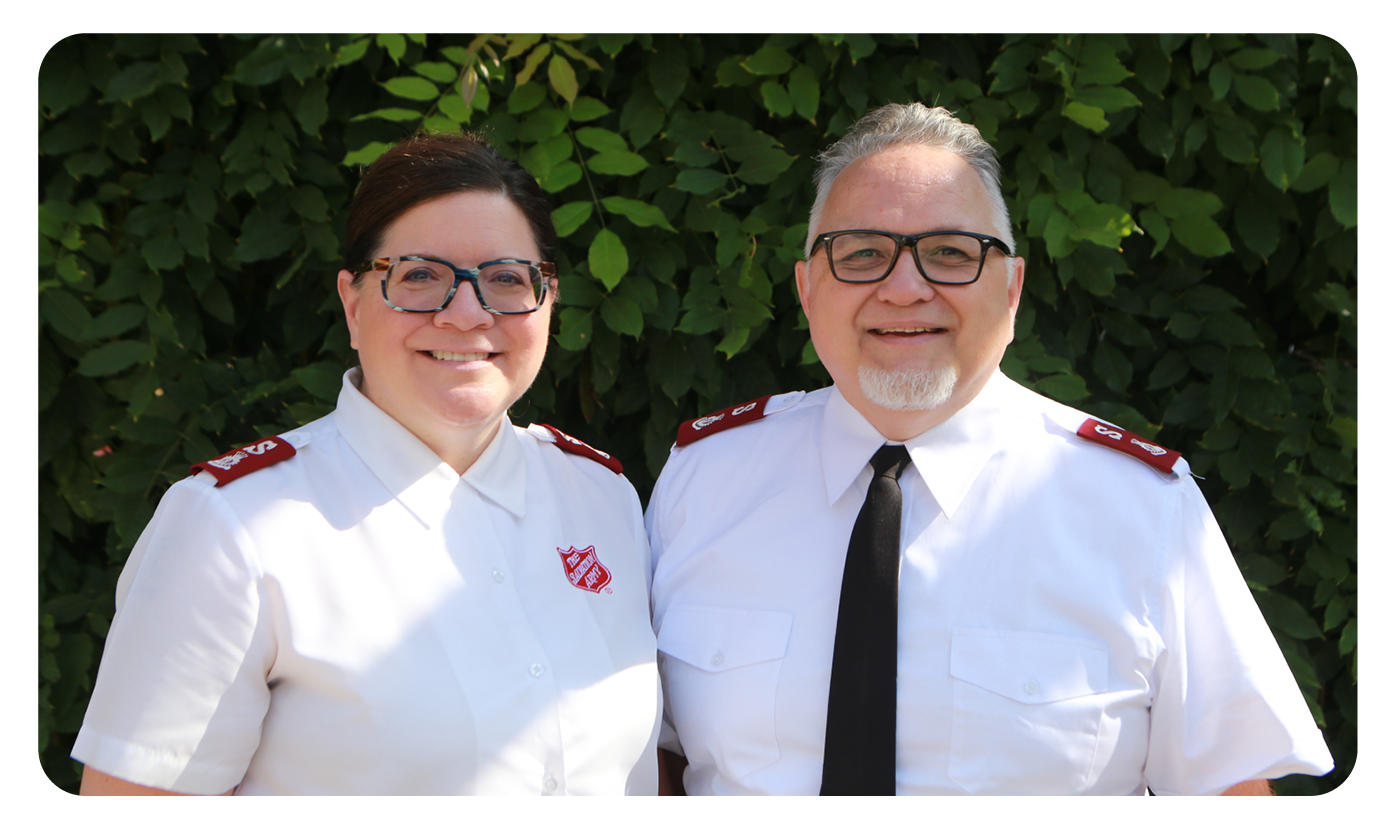 Rob & Stacy Birks, Majors, are in their 33rd year of marriage and just began their 30th year of ministry as officers in The Salvation Army. They’ve served God & OTHERS up & down the West Coast, including Los Angeles, San Francisco, Portland & Seattle, plus a few places just off the coast; Puyallup, WA & Sacramento, CA. Their first ministry destination, however – in 1992 – was San Diego. Coming back here, nearly three decades later, was a complete surprise to them – a fantastic one! They have three adult children; Emily, Graham & Lauren, who live elsewhere. “Empty Nesters,” would fit them if it weren’t for a beautiful dog named Charlie.

Stacy enjoys hospitality & fiber arts (she’s been known to participate in Yarn Bombing - it’s a thing). Rob is into baseball, movies and vinyl records. Truth be told, he’s a bit of a music nerd. Stacy prefers the term “Rock Snob”.

The Birks are excited about preaching and sharing life and Jesus with others. They look forward to seeing what God will accomplish in and through The Salvation Army Ray & Joan Kroc Center.

Click on the categories below to learn more about the different mid-week worship opportunities that are available.

Thursdays / Fireside Room / 6:00pm – 7:00pm
We believe people discover their true purpose and identity by knowing God through His Word.

Sundays Courtyard 11:00am – 11:30am
Join us for refreshments right after service. Fresh coffee, cookies and good conversation.

We’ve partnered with local church youth leaders to launch a monthly inspirational youth speakers’ series! With experts on technology, social justice, and other relevant topics the series is geared for 12–18-year-olds with a Christian lens. On the second Tuesday of every month the speakers will engage and inspire youth to connect with their community and grow in their faith.

Sundays Child’s Room 9:30am – 12:30pm
Childcare for children 3-months to 12 years old. This is a safe and fun place to learn about God’s love for us and others.

Last Friday of the month / Fireside Room / 11:00am – 1:00pm
Become a part of our Makers and Creators drop in gatherings and meet like-minded crafters, crocheters, knitters and more! Come together in our welcoming and safe space to socialize, learn a new skill, or finish that project you’ve been meaning to work on. Makers will get to work on self-lead projects in the company of other like-minded crafters in a positive environment, just bring your own project to work on and a good attitude!

Last Saturday of the month / Fireside Room / 8:30am – 9:30am
Welcome to the Kroc Center Men’s Ministry! We are focused on cultivating and reproducing impactful men of God who understand their Kingdom identity, calling and purpose. Our men’s group is designed to help men advance in this journey. Join us!

Sundays / Fireside Room / 11:30am – 12:30pm
Designed to deepen your connection with God, this group will meet for 10 weeks (Pilot group begins August 28th – open to all in January. Rooted covers the most basic and crucial areas of theology: the Trinity, Scripture, redemption in Christ, and eternity. Rooted brings the deeper things of God to light, but without the complexities often associated with theology.

Tuesdays / Rolando Room / 6:00pm – 7:00pm
Good people + Good food + Good fun & a little something from the Good book. Life groups are an integral and enjoyable part of the church experience at KCM. In addition to being a place to build relationships at a more personal level, The Open Table is a weekly gathering of people of good will.

Sundays / Rolando Room / 11:30am – 12:30pm
A space where women gather together and encourage each other, creating disciples of Jesus who will impact their family, community and the world. Our goal is to play a vital role in the lives of women so that the benefit is felt throughout the entire family. We help women strengthen the relationships they care about as we grow closer together and closer to God. We firmly believe that women who are close to God draw others close to Him as well.

The Tithe.ly app is designed for us to give/tithe financial gifts electronically. Just download the app, create a profile and search for The Salvation Army Kroc Center San Diego to give in this manner. In-person offerings and tithes are accepted in the back of the Rolando Room each Sunday.